Bridge Uganda’s pupils and communities are celebrating after outperforming the national average in the 2018 Primary Leaving Exam (PLE) for the second consecutive year.

Bridge pupils are among some of the best performers:

In Uganda, boys outperformed girls nationally, but this was not the case at Bridge schools where equal opportunity and supportive teachers enable girls to surpass their male peers.

Bridge girls performed better than boys, both within Bridge and across Uganda — indicating a far more equal playing field inside Bridge schools where both boys and girls can do well. 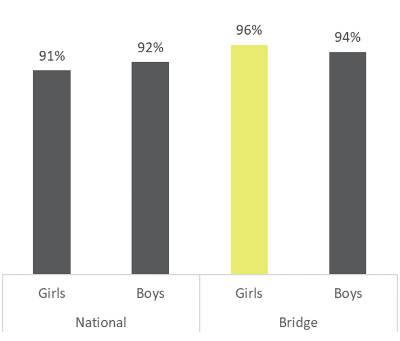 Above: 96% of Bridge girls passed their PLE, performing best in Bridge schools and vs. nationwide; overthrowing prevailing gender differences.

According to the United Nations: 700,000 primary school aged girls have never attended school in Uganda with 23% of those who do attend school dropping out early due to teenage pregnancy. An educational approach proven to tackle these challenges could be transformational for Uganda’s growth.

Districts including Hoima in the western region and Busia in the eastern region all revealed girls to be the best Bridge performers. In eastern Uganda’s Mayuge District, 14-year-old Brenda Namusobya scored an impressive 10 aggregate, placing her in Division One alongside Uganda’s brightest pupils.

Fourteen-year-old, Brenda Namusobya is from Nalinaibi village in the Mayuge District of Eastern Uganda, a relatively impoverished region. She scored an amazing 10 aggregates in her PLE, placing her in Division 1 alongside the highest achievers in Uganda.

Her small home is in a swampy area where every time it rains, her home floods. It’s a squeeze for her family — herself, mum, dad, three sisters and seven brothers.

Brenda’s parents who are both casual farmers couldn’t help but break down with tears of joy upon hearing her result, saying: “We are celebrating and dancing because our daughter has passed with such high marks! We had lost hope in educating our girl but when Bridge came to Mayuge we got hope that one day our girl will be someone important in Uganda. Our dream is becoming a reality.”

Speaking excitedly about her result, Brenda said: “I’m so happy about my score. I studied hard and I knew that I would make it. I had lots of help from my amazing teachers who never gave up on me. My parents are overjoyed because of my results!”

She added: “I want to be a doctor when I finish school and maybe even build my own hospital one day. Now it’s possible and I would never have achieved this without Bridge in my village.”

The results are even more startling considering that the eastern region is one of the most impoverished regions in Uganda.

Above: Bridge Uganda boys and girls celebrate their PLE exam success – beating the national average for the second consecutive year.

With many Bridge pupils living in impoverished communities in Districts like Mayuge, Arua and Kasese; success in their PLE means they’ll have access to some of the best Ugandan secondary schools and be able to go on and pursue their dreams.

The longer a child is at Bridge, the better they perform in exams

In addition, the results confirm existing data which shows that the longer a pupil is at a Bridge school, the better they will perform. 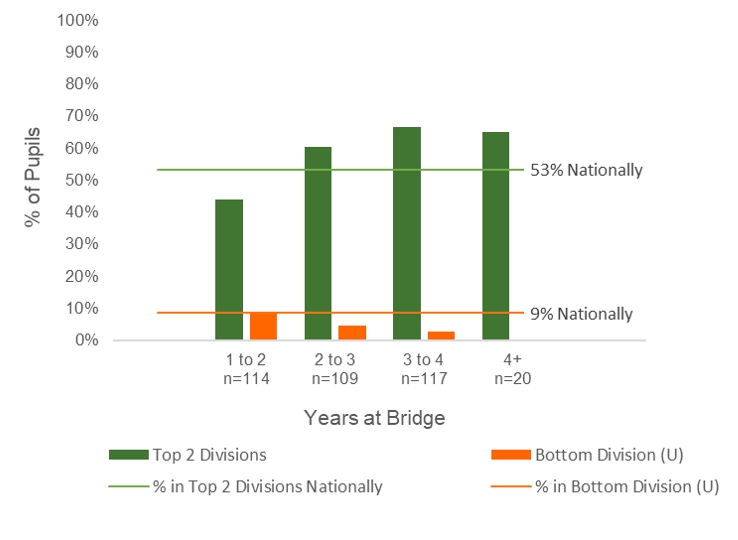 The national results are another rubber stamp on the consistent and exceptional performance of Bridge pupils. They build on the PLE successes of 2017; thanks to which Bridge graduates were able to join top secondary schools including Nabisunsa Girls School, Tororo Girls School and Busoga College Mwiri.