Once again the national primary leaving exam has come round in Uganda and the results have been published by the Ministry of Education and Sports (MOE&S) with much fanfare. Primary education is recognised as challenging in the country; teacher absenteeism is rife and many rural public schools are at a near point of collapse with children often leaving after years of classroom attendance unable to read and write.

Despite this, among the education achievements that often appear at the top is the increased primary enrollment under the Universal Primary Education (UPE) program. Which saw enrollment grow from 3.1 million children in 1996 to 8.4 million in 2013. Yet the question remains what is happening in these schools where children were attending in droves. This year, the primary leaving exam (PLE) results showed that while nationally 90% passed the exam only a little over half – 57% – achieved scores that placed them in the top two divisions; opening the doors to quality secondary schools.

Children like Ashirif Muguya from the district of Mayuge in the eastern region and Namulondo Shakila from Iganga district – two of the most impoverished districts in the country – are the type of children that Ugandans need to ensure their education system is supporting. Ashirif’s mother is unemployed in one of the country’s poorest areas and yet Ashirif has a love of science and aspires to become a doctor so he can help pregnant mothers in his community and reduce infant mortality.  Shakila’s hopes for life – and community background – are not so different, she wants to become a nurse and her mother, a casual farmer, and father, a community electrician, work hard to support her ambition. Across Uganda, children are hoping to escape the cycle of poverty and know, as do their parents and guardians that a good school is the best way to achieve this. 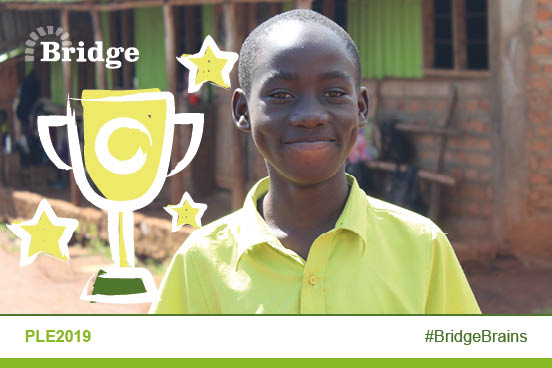 This is why the results of the PLE are monitored with such avid interest, it is an indicator of the growth and prosperity that the country can hope to achieve in years to come. 2019, marked the third year that Bridge pupils sat the national exam. The results show that poverty and performance does not have to be correlated. In the Eastern region, the most impoverished area of the country  and home to both Ashirif and Shakila- 67% of children at Bridge achieved marks in the sought after division one and two categories whereas only 43% of Ugandan children in the region achieved scores in these divisions. Both Ashirif and Shakila are celebrating after achieving division one scores; with 10 and 11 aggregate respectively. Remarkably, overall, 57% of children at Bridge achieving division one marks came from the eastern region. The story is the same, if not even more impressive, in the Northern region; a similarly poor area, where 78% of Bridge pupils achieved scored Division one or two marks, compared to only 46% of children nationally.  Across Uganda, districts such as Arua, Bugiri, Kiboga and Pallisa, produced some of the Bridge’s best Division two scores. In some areas whole schools of pupils excelled with 100% of Bridge pupils from Mayuge achieving Division one or two scores. In Arua, 100% of boys and in Bugiri, 100% of the girls were in the top two divisions. These breakdowns show – for the third consecutive year -that it doesn’t matter how poor the region or impoverished the community, what matters is the quality of the school and the support and training that the teachers within it receive.

This isn’t new. Across Uganda – and indeed Africa – there is a deafening clamour to improve learning outcomes. In addition, multilaterals, philanthropists and donor countries are all advocating for partnerships within the education sector that will help governments achieve these goals. And yet, the pace of change and innovation remains slow and rarely scaled.

Parents across Uganda want their children to attend schools that will open the door to opportunity. Getting children into the classroom should be recognised as an achievement but ensuring that they are learning once they are in there is even more of an achievement. Districts across the country such as Busia, Arua, Bugiri, and Iganga are full of children who have the potential to help Ugandan grow as a nation; all they need are strengthened public schools to help them do so. There are partners who can provide them.